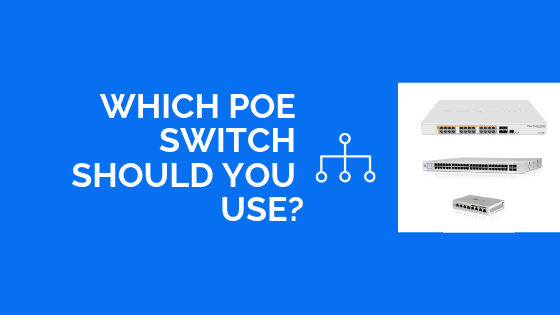 Home users demand for PoE switches is rising due to the increasing number of devices that can be powered that way. Typically it’s security cameras or wireless access points driving adoption.

There are lots of options out there and everyone will have their preference and recommendations. A home user has at least 3 good options to choose from in my opinion. All of which are full managed switch options because that offers important advantages.

They are fairly nice hardware wise, and a home network certainly won’t give it troubles. They are inexpensive brand new. The biggest plus here however is the management interface. It is by far the most consumer friendly option on this list. I deploy many of them in small business and home environments all the time. The interface allows me to manage a whole fleet of them at once. It’s great in that respect.

Bonus point if you are deploying or have deployed Unifi wireless access points, since the management interface is the same between them.

If all you need is a small switch for an access point, this 8 port switch with 4 PoE ports that desktop form factor, then this should be you first and last stop. The 16 port switch is the first Rackmount sized one. Once you get into 24 port and 48 port territory other things merit consideration though, like how much power you actually need. They make higher wattage versions of the 24 port and 48 port if you happen to be driving lots of equipment and need the extra juice.

All in all, Unifi switches aren’t a bad option for most people though, especially if you want a fire and forget sort of solution. I especially love the remote management aspect for my small business clients.

I love Mikrotik routers and RouterOS. They are like the AK-47 of networking. 90% as good, at a radical fraction of the cost. They are quite popular with ISPs in developing nations (who don’t buy cisco at 10x the cost because of the name recognition alone) and Wireless ISPs servicing rural areas here in the US because of the cost and feature set important to them.

With an MSRP of $380, the 24 port Mikrotik CRS328-24P-4S+RM provides extremely good value for money. Especially in a residential environment where all you need is the basics features anyway.

500W of PoE delivery over 24 ports, plus you get 4 10gb Fiber capable slots for linking to other networking equipment equipped the same way.

You can get a switch that retailed for thousands of dollars for under $200. Cisco and everything. Data centers have upgraded to the new 10GB based stuff and all this old stuff is on ebay now. That’s why the 48 port ones are about as cheap as the 24 port variety. There are just so many more 48 port ones out there.

It’s arguably hardest to handle and configure for the inexperienced, but it’s perfectly doable with some googling or a guide. It even works out of the box if all you want is a switch that will push PoE to attached devices. With 370W of power, it will probably cover most of what you intend to use it for. You will be able to overwhelm it with enough cameras if you tried though.

I went this route when building out the network in the home my parents retired to. I didn’t even bother configuring it when I put it in hastily on Day 1 of helping them move in. We dropped the rack in place, and had Comcast out to run coax. Then we grabbed the switch from the realtor’s office (we used their address so it would simply be there instead of “somewhere in the truck” or arriving at a house they didn’t yet technically own)

I dropped my parents SB6183 modem, ancient Mikrotik RB750 router and their recently purchased Unifi AC Pro access point on top of the switch after it was racked. I didn’t do anything to the switch at all config wise, I just pulled it out of the box and plugged it in and it powered the AP and gave data to anything you plugged in, just like an unmanaged switch would. I ignored it for the rest of the trip once we had internet up, as there was lots of manual labor to be done moving them in and also pulling wire and such.

I only bothered to actually configure the thing when I started installing IP cameras months later on a different visit and needed a VLAN for them to exist on.

All three options are valid choices depending on your situation and goals. I have experience with all three and like all three for certain things. In business I definitely deploy more Unifi stuff at this point, though I have been seriously looking at moving more toward Mikrotik long term. If they had some readymade Unifi Controller like solution, I would be all Mikrotik except for wifi access points already I think.

That said, buying a Cisco switch on ebay is a tremendous value if you can brave the setup process. It’s definitely the most DIY of the options though, and has that extra chance factor of being used equipment. Cisco build stuff like tanks, but nothing lasts forever.