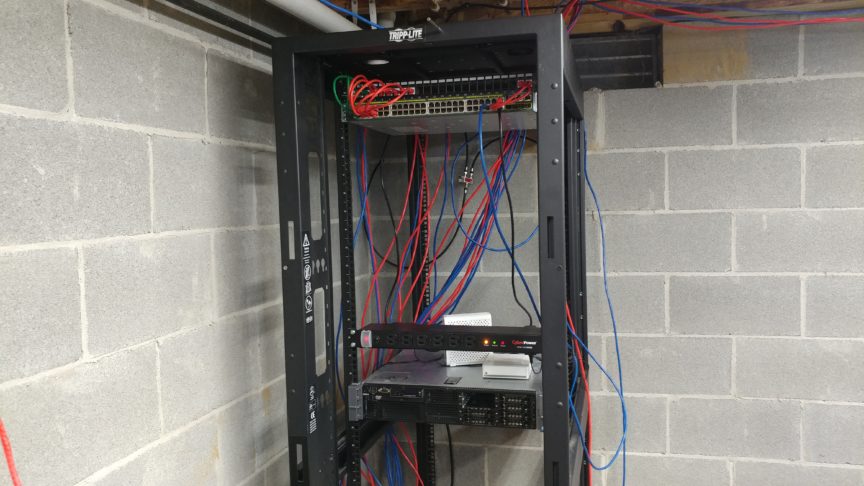 Home Security Cameras have taken off in recent years. Hardware is now cheap enough and software advanced enough to have everyone looking to add cameras to their house. Lots of people think nothing of putting up some Ring, Arlo, or Nest cameras is the simple and easy thing, and it is. The drawback is they are the ones in control of your cameras, and if you don’t pay their subscription, your equipment won’t work like you want it to. They will have you at their mercy.

This is a guide for everyone who wants to keep total control of their system themselves and not rely on a subscription service and the good will of any one company. This is how businesses do camera systems, basically.

An IP camera system has a few components, though there is a lot of overlap with other data infrastructure. It give the most flexibility, and is good in terms of total cost of ownership, It just requires a fair bit of infrastructure to even get 1 camera up and running. The marginal cost of adding the next camera is very reasonable, and you might have other parts already covered like most businesses would.

They come in all shapes and sizes, and much like a bag of golf clubs or a tray of surgical tools, there is generally a correct variant for a given task & budget. You are looking for any IP cameras with:

ONVIF is the open standard for interoperability in the security cameras market, and PoE means only having to run one cable for data and power both.

You want a network switch that does PoE (or PoE plus for Pan Tilt Zoom models) to handle your cameras and other data devices.

A dedicated machine for running camera recording and management software. They make purpose built boxes with PoE ports to run cameras to, but many businesses use a standard virtual machine instead running on their server hardware. You can use an old PC.

This is the software you run to actually manage your cameras. It’s your interface to the system, and what your smart phone app will talk to when you aren’t in the house. It’s the brains of the operation and your selection here will greatly influence the user experience. Blue Iris is the most popular option on the market, but there are plenty to choose from if you go searching. Milestone and Sighthound are other bigger names.

When my parents recently retired to a State with less punishing taxes than the Land of Lincoln, We did some networking work before they moved in, part of which was camera infrastructure done in this control it yourself fashion. 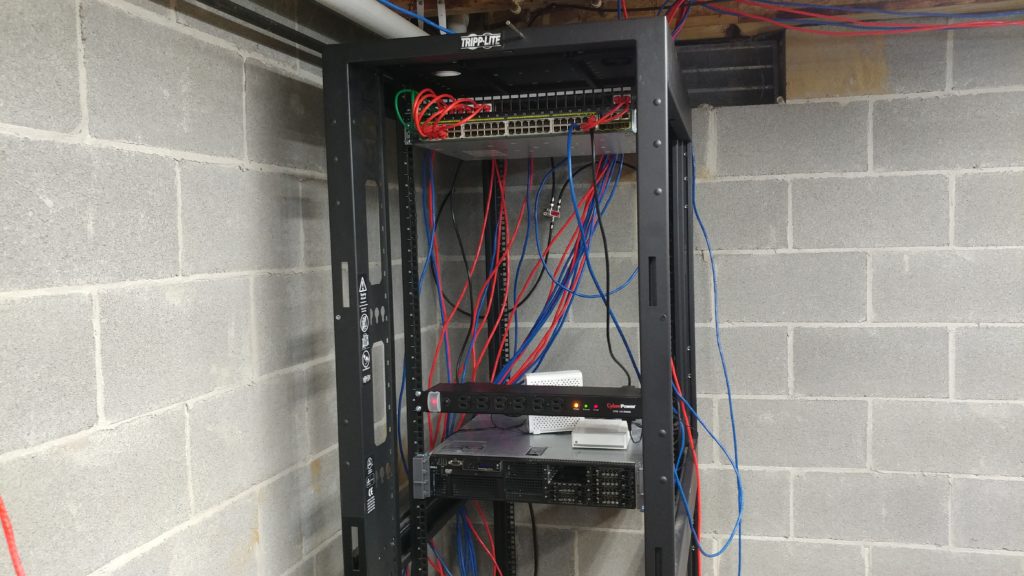 The Rack in all it’s semi installed glory. Eventually the cabling is going to get neatened up. It’s still quick and dirty for now.

I was able to score a full size, heavy duty Tripp-Lite Rack on Craigslist for $150, so we went fullsize open frame rack. Mostly because we could, and it would rack full size server equipment (I want to colocate something here myself) For customers I often use a wallmount enclosure instead. A Full Rack is excessive is most cases.

In my big, overkill rack, I have the following stuff:

-A Keystone style patch panel. I prefer these over your standard panel for smaller jobs because they afford you more flexibility down the road. In a data center this hardly matters, but for a home, lots of people will find value in being able to organize things after the fact, or make changes down the road.

-A Cyberpower power distribution unit that can be rackmounted.

-A Cyberpower UPS system (not shown because it’s in the very bottom of the rack for weight distribution reasons) to keep everything up and running in the event of a power outage. This home has a Generac Generator for power failover, so we didn’t need anything too fancy in terms of a battery. For everyone who can’t rely on a standby generator, I like the Cyberpower UPS, but this comes down to preference in terms of how much you care to keep the internet up during a power outage. You do want a UPS of some type, just so you have nicely conditioned power during regular operation. Think of it as a step above having a surge protector.

-A Cisco Catalyst 2960S-48LPS-L Switch, from ebay. I didn’t need 48 ports, but the price was right (big businesses buy WAY more 48 port switches than anything else, so there are lots floating around). I bought this because it had PoE+ support on the cheap. If I was buying new, I would use a Unifi PoE+ Switch instead. If you aren’t comfortable operating a Cisco switch, it might be a good idea to look to Unifi instead. They are very user friendly, and match the APs and routers I regularly deploy. At less than half the cost of a new one though, the ebay Cisco was the better choice here in our estimation.

– Arris Surfboard SB8200 modem. Because someone failed in packing up the SB6183 from the previous house correctly and it couldn’t be found for weeks. We ran out to the nearest store and got the SB8200 so we could have internet right away. The SB8200 is a solid unit, you just want to avoid the SB6190 because it has a bad processor chip in the design. The SB6183 is the right unit for most people currently, unless you want to future proof a bit with the SB8200. At a $100 premium though, it doesn’t make sense for most people, unless they already have gigabit+ service from Comcast.

-The router is an old Mikrotik RB751G-2HnD. If it were doing any duty besides just routing, It would have been replaced long ago, but since we have dedicated wireless APs, and serious switch, it does the job just fine. I deployed this for them years and years ago and since it runs the same routerOS as new Mikrotik units, it’s up to date and viable still for our purposes. Any new network build I do, I generally opt to use a Unifi USG instead, which I recommend to anyone reading this. When this Mikrotik finally need to be replaced, we will probably use the Rackmount version of the USG not because we need the power over the smaller one, but just because we want rackmount equipment for the rack.

-Finally the Dell Server…A PowerEdge 720. I went this route because there are other things I host locally, including a Home Assistant VM and some business related stuff. Making a VM for the Camera Software makes too much sense for me to not go this route. If you aren’t running a bunch of other servers, you might consider recycling an old desktop you have lying around, or buying a cheap refurbished PC off of ebay? Any decent Dell optiplex will get the job done as a dedicated DVR machine. Don’t just buy a server because I did. Only go this route if you have other plans in mind, like home automation.

If you do go this route…you want a few features in the server you end up buying off ebay.

You want the Redundant Power supply option, a Perc6i RAID controller (or better), and bonus points for an IDRAC card (remote access to the server at a low level). I grabbed a 2.5in drive version instead of the Larger 3.5in drive configuration because it will fit SSDs natively, which I use in the server for everything but mass storage.

As you can see, the infrastructure is more involved than the 4 or 8 cameras kit you buy from Costco or where ever, but doesn’t just concern cameras, it implies a very nice data infrastructure for all your other technologies as well. A network ready to add IP cameras is by definition a very well built network by residential standards.

In Part Two, we will look at DVR software options.