As Boomers have started retiring, home builders have been designing homes with Aging in Place considered from the design phase forward. Ground floor master bedroom suites, ramps instead of steps into the home, and zero threshold showers (so you can roll a wheelchair in without issue) are just some of the many modifications builders are adding to homes these days.

Even as a younger home buyer, these sorts of changes to a house are genius to include, as they add utility without affecting anything negatively, and generally don’t cost much different when building from scratch. Later modifications get expensive, but during the design phase, planning for the future is cheap.

With this in mind, here are 5 Home Automation projects any Age-in-Place home would benefit from. 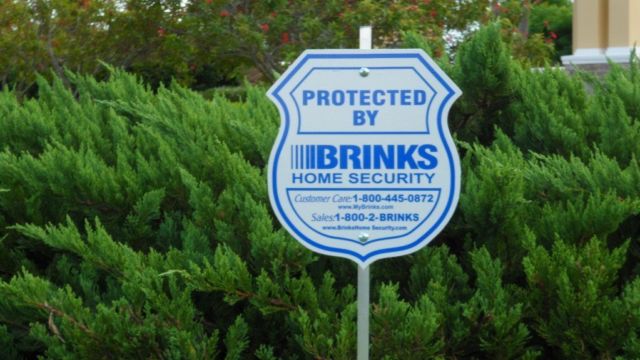 While the main benefits of a well designed alarm system, namely a reduced chance of becoming the victim of a property crime, are known to everyone already, there are a few aspects of these systems that can specifically help Seniors maintain their independence & feel more secure in their home, especially alone.

First, Most Panels can be paired with a medical alert device for traditional in-home medical alert. In fact, when Life-Alert and competitors started up years ago, it was alarm industry technology they modified to get the product going. It’s not as slick as a modern medical alert pendant, which typically has it’s own cell connection so it can work almost anywhere. This solution would work anywhere around the house though, like the original in-home Life Alerts.

Modern alarm panels typically include two-way speech capability as well. Lets say you are home alone and have fallen and can’t move to get to a phone. You could trigger your alarm pendant or use a voice assistant like Alexa or Google home to trigger an alarm, and dispatch would try and speak to you through your panels, stay with you on the “line”, and get emergency services to you.

Environmental sensors can also be attached to security systems to monitor out of the way areas of the home for water leaks and extreme temperatures. Smoke/Heat detectors and Carbon Monoxide detectors can be tied directly into the Alarm panel too. Sensors to keep a ceaseless watch on the water heater and pipes in the crawl space or basement is a very good thing in a Age-In-Place home.

When building new, wired sensors are the way to go. No batteries to manage and extreme reliability. Not to mention the hardware is much cheaper to boot. A wireless Reed Switch (the magnetic open/close sensor) costs about $30, while the wired version costs like $1.25. Wireless is popular because of the vast labor savings on install. In new construction, it’s always worth it to build out the wired sensors though.

When building an Age-in-Place home, it’s trivial to prewire doors for various automation tasks, up to and including motorized operation. It becomes a more involved task later, so it’s important to consider when planning the build in the first place. It’s very easy to do when the walls aren’t up, and much harder to do down the road.

While many people are retrofitting smart doorknobs and Doorbells to already built homes, you can eliminate the smart doorknob component entirely in favor of an electric strike wired directly to a smart doorbell. It operates the same way, with only one smart component instead of two. Add it some wire for a future motorized arm near the top of the door, and you are just some hardware and a few minutes away from a full ADA style handicap access door should it become desirable or necessary down the road. You can even add a standard exterior locking door handle as a failsafe mechanical way to open the door.

While everyone is lazy and likes the ability to shout at a room to control lights, designing for maximum utility with the minimum of mobility is an Age in Place design principle. Beyond not having to get up to control lighting & appliances yourself, it’s got some less obvious benefits.

First, it enables a system to control lights automatically. This is really powerful. You yelling at Alexa to turn on the kitchen lights is just simple remote control, which it obviously makes possible. Less obvious is actual automation. Your Home Assistant polling a NOAA database for the sunset and automatically turning on exterior lights then, or based on some presence detection system turning on and off the lights you need at any given time. It also means never forgetting to turn lights off (or on). Of interest to Snowbirds, you can also easily automate turning on and off lights & TVs to mimic you actually being home.

It’s got features everyone wants, and will eventually come standard, but there is lots more proportional utility for seniors to having the capability.

There are plenty of Home automation standards you can use, but perhaps the best thought out one available is Insteon. The next generation protocol that replaced the venerable x10 protocol. It uses dual path communication. Wireless, like Z-wave, using the same frequency space, plus powerline communication for devices plugged into mains power. This make it extremely robust and scalable. You can change standard outlets and light switches out for the Insteon versions, add in the Insteon hub, and be ready to go. You can automate as little or as much of the system as you want, and add to it later. Manual operation works just like normal.

Another lighting project for everyone that has real big additional utility for seniors especially is the trend to use bulbs or strips of White+RGB LEDs for exterior accent lighting. If you use color capable accent lighting like this, decorating for various holidays is as simple as turning on Christmas or Halloween mode for the lighting. No hanging lights on the roof or eaves yourself. 5 seconds to tell Alexa and it’s done. This again reduces the risk of maintenance related injury. Lots of people get hurt every year trying to hang Christmas lights.

Again, it’s just a normal technology that pays big dividends for Seniors already. Voice commands are easy and intuitive, even for people with no adeptness with computers. Thus, they have more utility to people who struggle with alternatives like web or phone app controls. The worse a user is with standard computer interfaces, the more benefit derived from having voice controls. Pretty much all home automation stuff is being designed with voice control in mind too, so it’s a fair bet it will be around long term.

When planning a home, at bare minimum I suggest thinking about where in each room might be best to position such a device and make sure you have a power outlet there. Most are designed to be placed on a surface, at minimum. Don’t just think about it from the standard just off the ground location either though. In an Age in Place Home, you will want at least an outlet in each room positioned much higher up the wall, at lightswitch level, so one doesn’t have to bend over to plug in a device like a vacuum. This electrical planning good idea might serve double duty as a place to mount a voice assistant in a bracket. You can always find a bracket made for this purpose on amazon for any major voice assistant that comes out. It’s just part of the ecosystem now, like cell phone cases. 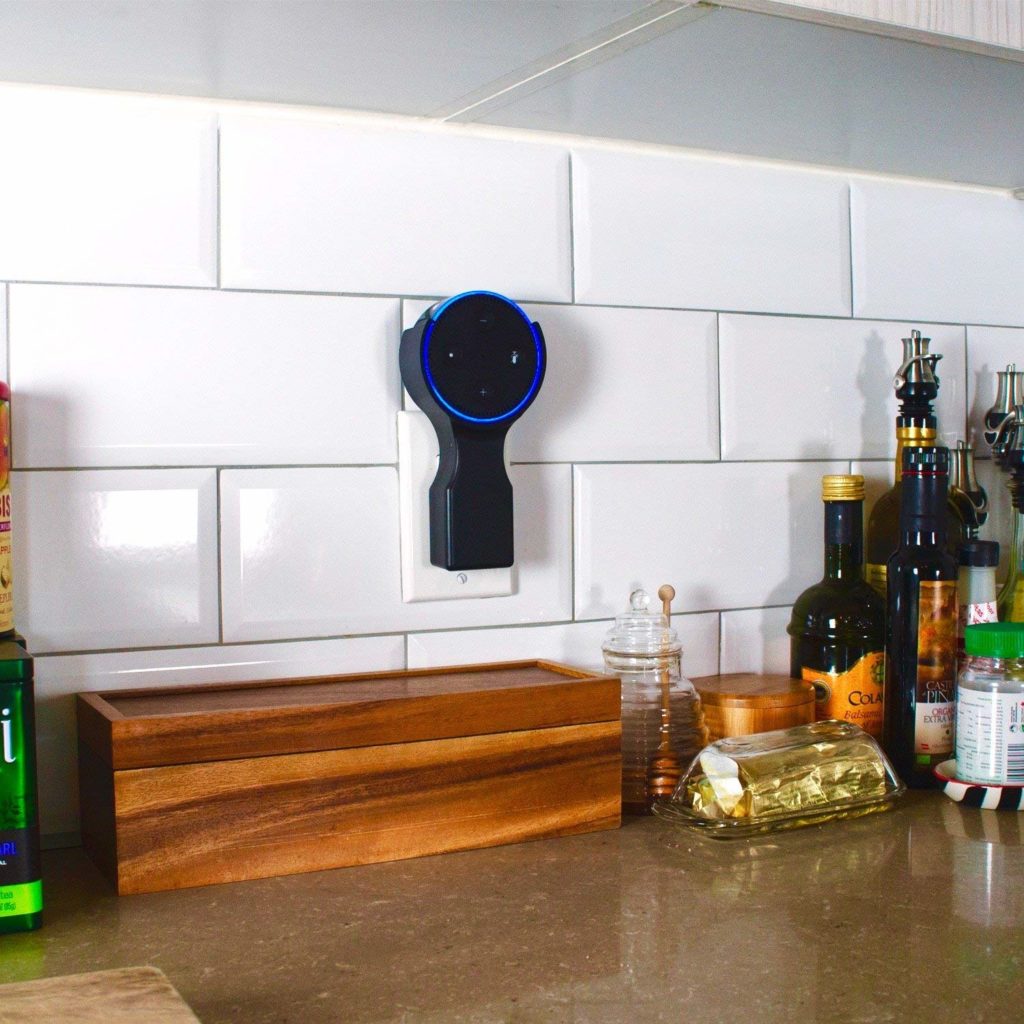 A wall outlet bracket for a 2nd generation Echo Dot

If you really wanted to plan ahead, planning out a ceiling speaker rough-in bracket with an Ethernet drop might be the best future proofing you can do. This would allow a ceiling mount location with DC power & data via PoE for anything smaller than 8 inches across and secured there. That give you tremendous future flexibility and an ideal place for a microphone cluster, acoustically, and you can always get a speaker cloth grille for the opening to hide your device there, and a cover plate if you don’t ever get around to it. It’s standard building hardware. Be mindful of ceiling fan placement as well if you go this route.

Unless you are the handy sort who wants to play with Raspberry Pi computers and such, it’s probably far more sensible to install that light switch level power outlets in every room to pull double duty with a bracket mount off the shelf consumer device here.